Get me outta here!

Say hello to Kiara – the world’s first Liliger! The cub was born last month in Novosibirsk Zoo in Siberia and it’s thought that she’s the only one of her kind in the world. A little bit magic maybe 🙂 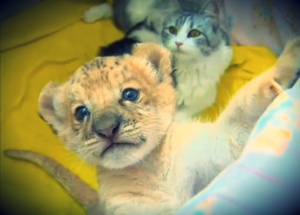 She’s a very rare quarter tiger; her mum is a liger called Zita (a cross between a tiger and a lion) and her dad is an African lion named Samson. But she’s not being looked after by her liger mother or her lion father – but instead an ordinary domestic house cat (and an extreeeemely lovely looking one at that). The cat plays with Kiara and keeps her warm 🙂

Breeding rare protected animals is of concern for wildlife laws as hybrids often suffer from growth disorders but so far so good for little Kiara. Normally lions and tigers would attack each other on sight, so natural cross breeding of the two species is rare but has been known to happen even in the wild. 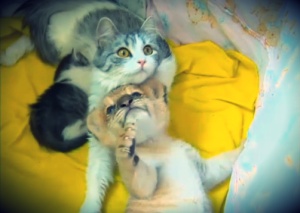 So will Kiara be a fan of swimming like a tiger? Or happy being part of a pack like lions? Who knows? An adult liger can be twice as heavy as a lion so let’s wait and see how big Kiara gets. Hercules, the world’s most famous liger lives in a Miami zoo and was recognized by the Guiness Book of World Records as the largest living cat on Earth, weighing over 410 kg! 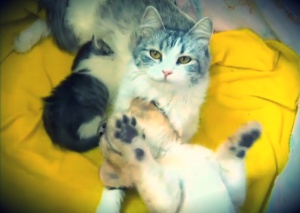 Visitors will be able to see Kiara when she’s a little bigger next month. Mr Whiskers wants to know if he can have one for Christmas *sigh* as if our little Boop wasn’t enough mischief!

Head over to the BBC – Siberian Zoo Breeds the World’s First Liliger to see the full video.

One thought on “World’s First Liliger Born in Siberia”